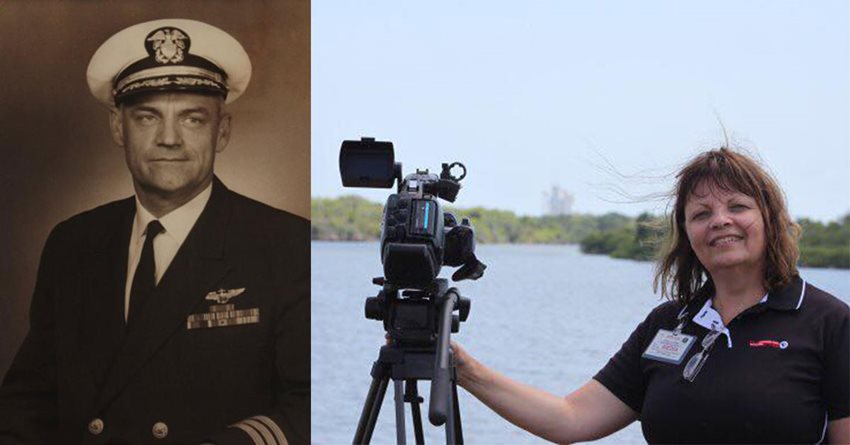 As a young girl, Jill Hubbs knew exactly who her dad was. And what he did. And what that meant.

"He was the commanding officer of his squadron, which was VF-23, the world famous Black Cats,” she said. "He was extremely patriotic. We had a flagpole, no matter where we were we had a flag flying everyday. He definitely instilled a strong sense of patriotism and love of country and love of family.”

Donald Hubbs had been in the Navy nearly 20 years. He was considerably older than most of the other pilots flying missions in Vietnam.

"We were a Navy family,” Jill remembered.

Unfortunately, the Hubbs family ultimately learned of the loss and sacrifice suffered by so many military families before. But their loss was different — unlike others back home mourning their fallen loved ones, the Hubbs were left waiting in the dreadful void of the unknown.

Jill’s father would join the ranks of the missing, those never recovered.  It was a difficult loss to absorb. Especially for a child.

Jill lost her father in March of 1968. In the years that followed she has never stopped wondering about his fate. And she has never realized any real resolution on the matter either.

"What ended up happening is the days turned into weeks and the weeks into months and the months into years and then into decades,” Jill said. "After a number of years, you just come to accept you’re not really ever going to know what happened, you just have to accept that.”

But there’s always been hope.

Live Sighting: ‘What if it’s true?’

When Donald Hubbs was lost, he was flying a mission off the USS Yorktown on the North Vietnam coast. He and three other men went off radar and were never seen again.

"They have his last known coordinates,” Jill said. "They said there was just no trace, it was like they were gone, they had vanished.”

Nearly 20 years later the U.S. government came to the Hubbs family with information. There had been a reported ‘live sighting.’

This was not the first shred of hope. Years earlier, Jill and her mother had glimpsed another possible ray of light.

"The Vietnamese had released this propaganda film at Christmas time, where they were showing how benevolent they were to the prisoners, and they depicted them in this Christmas service and then working in a garden, and then having a meal or whatever, it was totally a propaganda film, but the military had families come together and watch that,” Jill remembered.

In the film, she saw a man that looked like her father. Her mother saw him, too.

"We identified a picture, you’re talking about a black-and-white film, and all those years ago, so it wasn’t the best quality, but there was someone that both my mom and I, sitting in different parts of the room, thought was my dad,” she said.

But they never heard anything more about the man in the Christmas propaganda film. Didn’t really hear anything more at all until the 1987 live-sighting report.

The family was told that the information had come from a small village in North Vietnam, from a source who said that the Navy pilot was being held along with 13 other American prisoners.

"And whoever this was said my dad slipped a piece of paper to him and it had my grandmother’s address here in Pensacola on it,” Jill said. "What do you do with that, 20 years after the fact?”

The report was vague. And nothing more followed. But, of course, such news breathes new life into long held hopes.

"Why would somebody make something up like that,” Jill thought. "What if it’s true?”

A Trip to Vietnam

A few years later, Jill’s search for answers about what happened to her father took her to Vietnam. It was a desperate quest arrived at after years of waiting.

"My mom thought it was dangerous and she didn’t think I should go,” Jill said, noting that the U.S. didn’t yet have normalized relations with Vietnam. "I just figured we had tried everything else underneath the sun, so we needed to give that a shot.”

Traveling to Hanoi, Jill met with the Joint Pacific Accounting Command, or JPAC, the agency that handles the cases of Prisoners of War, or those Missing in Action. They provided her with information she was already familiar with — how her dad’s plane had taken off from the Yorktown, how they were lost to radar over water and near the coast, how no wreckage debris was ever located despite an immediate and lengthy search, and how the Vietnamese had always claimed no knowledge of the plane or its crew.

But they also had a new bit of information in Hanoi. A new shred of hope, a chance at closure.

"They had a Vietnamese grave registration and it had my dad’s name on it,” Hubbs said.

The registration was from a province along the coast. A little further south than where the plane was last reported.

It was something, but not much. An aging Vietnamese document with a list of names, nothing more.

"It was like saying, you know, that his name was listed on this grave registration in Escambia County — you wouldn’t know where to look, I mean, there’s no other information. Unfortunately they had nothing else to go on,” Jill said. "They just didn’t have any other leads, names of any villagers they could talk too — how’d he get there, where’s his body buried?”

Before leaving Vietnam, Jill thought about trying to locate the source of the live sighting report she’d received a few years earlier. That didn’t end up panning out.

"I wanted to find the person who did the live sighting report, I wanted to talk to him myself,” she said, explaining that she inquired about the information’s source no useful information was provided. "All the records they gave me, anything with any pertinent information like that was all blacked out.”

Jill’s trip to Vietnam in search of information about her father was a long time ago now. And those shreds of hope have faded with the years.

"Nothing has ever come of that grave registration again, or the live sighting report, other than frustration,” she said.

It’s been 48 years since Jill found out her father and his crew was lost in Vietnam.

"Since 1968 we have just never known,” she said. "And I’m kinda just back to the same place that we were all those years ago, where I have to accept we probably will never know exactly what happened to him.”

Still, small chances for some resolution keep popping up. A couple of years ago Jill said the government asked for a DNA sample. Why? She doesn’t know, they couldn’t say.

"Made me hope, you know, why are you asking me for DNA now if you — did they recover something?” she wonders.

That would be something. That would allow for the fallen father to receive his proper respects.

"They do recover remains all the time,” Jill said, hopeful her questions will be answered in the future.

Having been classified as missing as opposed to killed in action, the Hubbs family lived in a sort of hope-against-all-odds world that didn’t allow for the bidding of goodbyes. As such, there has never been a funeral.

This occurred to Jill during her mother’s funeral a few years back.

"I was sitting in church, at her funeral, and I realized, we never had a funeral for my dad, or even a memorial service because we kept thinking he might come home,” she explained. "That actually struck me at my mom’s funeral. So, one day it’d be nice and my dad deserves that honor just like anybody else that served our country and made the ultimate sacrifice.”

Jill Hubbs currently resides in Pensacola, Fla., where she works as Director of Education Content and Services at WSRE. Later this month, check back as she shares about her experiences producing the 2008 documentary about the Veterans Memorial Park Pensacola, as well as her upcoming documentary, They Were Our Fathers, about children who lost parents in the Vietnam War.

The Veterans Memorial Park of Pensacola depends on the generosity of people like you to provide ongoing maintenance and upkeep for the grounds and the artwork. Please consider becoming a Friend of the Park by setting up a monthly donation. Thank you for your support.