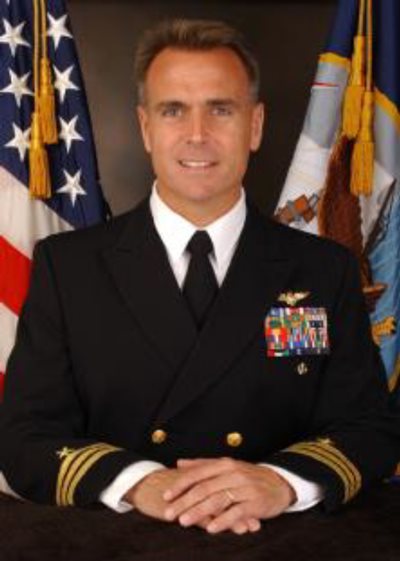 Navy Commander Scott Moyer is a Highly decorated combat fighter pilot and, among many other decorations, was awarded the Distinguished Flying Cross. He is also a two time member of the Blue Angels

Scott was born and grew up in North Wales Pennsylvania. He is a graduate of Millersville University, where he earned a Bachelor of Science Degree in Business Administration.

He joined the Navy in June of 1985 and was commissioned an Officer in October of 1985. He completed Navy jet flight training in Beeville TX in September 1987. Graduating first in his class, he was selected to remain in Texas as an instructor pilot in the TA-4J Skyhawk.

In 1989, Scott reported to NAS Miramar CA where he flew the F-14 Tomcat and completed two deployments aboard the USS Ranger, flying 42 combat missions in support of Operations Desert Storm and Southern Watch over Iraq.

Scott reported to NAS Oceana VA in 1994 for assignment as an F-14 instructor. During this tour, he was selected to join the Navy’s elite Blue Angels flight demonstration squadron.

As a member of the Blue Angels Scott was an ambassador representing the United States Navy and the Armed Forces, visiting Children's Hospitals, VA hospitals, High School and College ROTC units. Traveling over 300 days a year, he provided inspiration and motivation to many around the country and the world.

Following his tour with the Blue Angels, he returned to the fleet and deployed aboard the USS Roosevelt. He was personally chosen to lead the Navy’s first strike into Kosovo in support of Operation Allied Force. Under heavy fire he successfully led a 24 aircraft strike and was awarded the Distinguished Flying Cross with Combat Valor. He was selected as the 1999 Atlantic Fleet Fighter Pilot of the Year.

In 1999 the Blue Angels suffered a fatal mishap and Scott was called upon to return to the team for the 2000 season.

Following his second tour with the Blue Angels, he attended the U.S. Naval War College in Newport RI, where he earned a Master’s Degree in International Relations and Strategic Studies.

Scott was promoted to Commander and assumed command of Fighter Squadron Eleven in 2002 aboard the USS George Washington. He flew missions in support of Operation Enduring Freedom and Fallujah. While in command Scott was in charge of over 300 personnel, 18 jet aircraft, and over a twenty million dollar budget. He was awarded the Association of Naval Aviation Leader of the Year Award as selected by his peers.

In 2004 Scott deployed aboard the USS Carl Vinson as Operations Officer. He was personally responsible for the daily operations of the nuclear powered aircraft carrier as well as the embarked Air Wing.

Following twenty one years of distinguished Naval Service, Scott retired from the Navy in 2006. He accumulated over 4,600 flight hours, 725 Carrier Landings and flew over 80 combat missions. His awards include The Distinguished Flying Cross, The Meritorious Service Medal, seven Combat Air Medals and various other personal and unit awards.

Scott continues to serve as consultant to the Blue Angels and volunteers his time to support the Wounded Warrior Project and the Ronald McDonald House as well as other civic and community organizations.

He currently lives in Virginia Beach VA with his wife Michele.
Back to Blogs