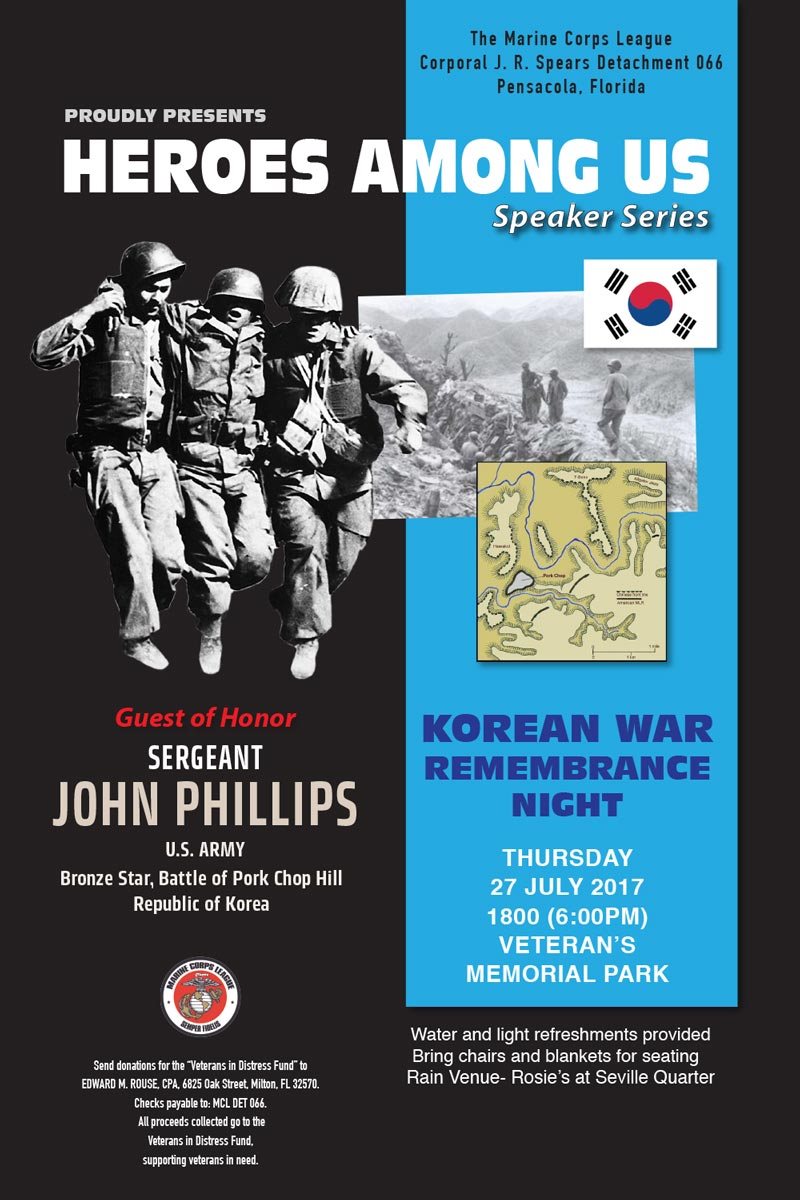 John W. Phillips is a native of Mobile, Alabama. After graduating from college in June 1952, he enlisted in the U.S. Army and was sent to Fort Jackson, South Carolina, for 16 weeks of basic and advanced infantry training followed by eight weeks of Infantry Leadership School in preparation for Officer Candidate School (OCS).  However, the Army had different plans and instead of OCS sent him and all but one of his Leadership School classmates to Korea.  In Korea he was assigned to the 7th Infantry Division.  He started as the last ammo bearer in an 81mm mortar squad in H Company, 17th Infantry Regiment. In the mortar platoon he held progressive positions as ammo bearer, radio operator, forward observer, computer, gunnery sergeant, and platoon sergeant. In Korea he was awarded the Combat Infantryman’s Badge (CIB), a Bronze Star with "V” device, and other ribbons. He contributed to the book On Hallowed Ground: The Last Battle for Pork Chop Hill written by Bill McWilliams and published by The Naval Institute Press in 2004. When he was discharged from the Army in 1954 he returned to Mobile where he entered the real estate business.  In 1957 he entered the Episcopal Theological Seminary of the Southwest in Austin, Texas, and was ordained in the Episcopal Church.  He has served churches in Alabama and Florida.  In 1975 he joined the faculty of the University of West Florida for 16 years.  More recently he has served as Chaplain for the 17th Infantry Regiment Association. He is a Life Member of the American Legion.

The series, now in its fifth year, is held at 6 p.m. on the last Thursday of each month from May through October. It is presented by the local Marine Corps League, J. R. Spears Detachment 066. Water and light food will be provided; people should bring their own chairs or blankets

Admission is free and open to the public, although donations will be accepted for the Veterans in Distress Fund to help veterans in need.

Donations for the "Marines in Distress” Fund can be sent to:

About "Heroes Among Us”

The "Heroes among Us” series, founded in 2013, features veterans from all branches of the military service. The goal is to let those people share their experiences with others, civilians and military as well as those on active duty. The events are organized and sponsored by the Marine Corps League, J. R. Spears Detachment 066.

About the Marine Corps League